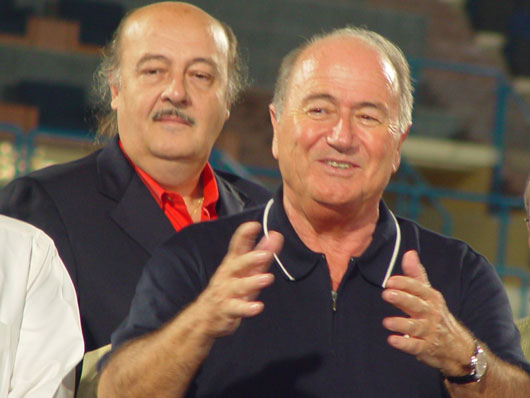 FRANK LOWY claims to not enjoy controversy but that hasn’t stopped Football Federation Australia’s chairman from hiring one of international football’s most colourful characters to help his dream of bringing the 2018 or 2022 FIFA World Cup to Australia.

His job, according to FFA, is to provide „high-level strategy and networking advice and counsel“, while Hargitay also claims to offer FFA „relationship building and advice to the FFA in matters of relevance to Australia’s bid for the 2018 and 2022 World Cups“.

FFA refuses to reveal how much it is paying Hargitay and his company, European Consultancy Network, even though funding for Australia’s World Cup bids comes from a $45.6 million Federal Government grant.

At times elusive and initially reluctant to speak about his role for Australia, Hargitay consented to a rare interview, via email and under strict conditions that his answers be „published in their original form, not shortened, edited or amended in any way, shape or form. If changes are made in one answer, the entire interview MUST NOT be used.“

(Still, some questions and subsequent answers for this article have been condensed or omitted for reasons of space).

Born in Hungary in 1951, Hargitay is undoubtedly as well connected as his language skills are broad.

He speaks fluent English, Hungarian, German, French and, he said, „reasonably fluent in Spanish and have a fair command of Portuguese, get by in Dutch and read/understand Swedish and Romanian. If you want to count Jamaican patois and Swiss German, you can add those to the list as well.“

Hargitay grew up in Switzerland where he played football as a junior. He says he still follows FC Basel but is also a season ticket-holder at Chelsea, a team he has followed for the past 10 years.

But importantly, Hargitay was „special adviser“ to FIFA president Sepp Blatter, one of the most powerful men in world sport, until December 2007 when he quit that role to work for England’s 2018 World Cup bid.

Last May, Hargitay narrowly escaped disaster when an earthquake destroyed a Chinese airport from where a private jet he was travelling in had just taken off.

The connections firm up.

Hargitay is an adviser to Bin Hammam, who is a close associate of Lowy.

„I have been [Hammam’s] adviser for a number of years and enjoy his friendship,“ Hargitay told The Sun-Herald. „There are numerous areas where we have worked together over time, primarily pertaining to developing football in Asia, which is his great passion.

„I continue to be close to the AFC president and was happy to assist him and his team during the election for membership in the FIFA executive committee.“

The European Consultancy Network was involved in the early stages of England’s 2018 bid before Lord Triesman was appointed chairman of their campaign and called for all outside consultants to reapply for their jobs through a tender process.

The European Consultancy Network declined and the Daily Mail reported Hargitay’s team lost a „seven-figure contract“ (in British pounds) with the Football Association in the process.

Hargitay denies the England deal was that lucrative.

„The seven-figure contract is a myth,“ he said. „Our initial work was in the high five figures and would have been in the six over a period of two years.

„After we concluded our work for the England bid, we were approached by several countries, none of which we were interested to work for,“ Hargitay added. „We put a proposal to the FFA, which was accepted and ECN and I were asked to join them as consultants.“

He spun public relations for the Union Carbide chemical company after the infamous 1984 factory meltdown in Bhopal, India, which killed at least 3000 people at the time and more than 20,000 since from after effects.

Hargitay also worked for Marc Rich, a US tax-fraud felon, one of America’s most wanted, and notorious as a sanctions-buster during South Africa’s apartheid regime.

In 1995, Hargitay was arrested, and later acquitted, of cocaine trafficking by Jamaican police.

In 1997, he was arrested by Interpol in Miami after Hungarian officials sought an extradition order and served seven months in prison as a flight risk after being charged with conspiracy to import 18 kilograms of cocaine to the United States.

He subsequently won an acquittal on all charges.

„It was indeed ’something of an experience,'“ Hargitay said when asked if there was anything positive to take from that period in his life.

„Yet, what happened 11 years ago has no bearing on my work and ‚acquitted of all charges‘ is an accurate summary of what happened. Other than that, I see no reason to revisit a matter ad nauseam where I won and powerful people who tried to frame me lost. The facts speak for themselves.“

In 1999, Hargitay was employed by Swiss company ABI, which claimed to specialise in „covert operations assignments“, according to its website.

But it was with the consultancy network and FIFA that he perhaps found his true calling.

A European Consultancy Network website, since shut down, once claimed to help clients „stay out of the media“ … „and to prepare such briefs, news items and alternative scoops that would divert, detract and destabilise imminent media interest.“

Outside of football, the European Consultancy Network’s clients include a Swiss private bank with interests in the Middle East and, in an amazing turn of events after his earlier legal drama in the country, Hargitay is now an adviser to Jamaica’s Minister for Transport and Works, as well as a member of Switzerland’s federal parliament, among others. He recently earned PR points for his idea to hand out show bags advertising Australia’s bid at a recent football industry convention in London. As for Australia’s chances in 2018 or 2022, what feedback has Hargitay received from FIFA’s executive committee?

„I understand that Australia’s technical bid team have made the best impression of all,“ he said. „They always meet all the deadlines, they are disciplined, attend all relevant FIFA meetings, deliver all requested materials in a complete manner and have demonstrated a determination and skills that have impressed many at FIFA.“

Whether that’s worth a consultancy network invoice being paid by Australian taxpayers is something for FFA boss Lowy’s judgement.

Already well connected to FIFA’s executive committee – the 24 men who vote for World Cup hosts – through his place on the organising committee for the 2010 FIFA World Cup, Lowy would not comment on Hargitay’s appointment.

In a statement, FFA confirmed the consultancy network had been working for Australia since January, adding, „FFA does not disclose the detail of arrangements with consultants.“

„I probably did rather well over time, which is why the trust grew and so did the quality and intensity of my mandate,“ Hargitay said, when asked of his key relationship with FIFA president Blatter. „Whether my work for FIFA and its president was an important role, as you say, is not something I would want to qualify in those terms.“

„Any mandate is equally important to me and to my team. That is the nature of the beast called consulting.“