The ISL bribery system: 138 million CHF for senior officials in the Olympic world

As promised the other day: The extended and overworked version of my presentation at Play the Game conference last week in Coventry – with important backgrounds about the new „associate member“ of the Olympic Journalists Association:

The ISL bribery system: 138 million CHF for high-ranking officials in the Olympic world

A few weeks ago I had several discussions with IHF-President Hassan Moustafa. He told me:

We are a Handball-family. If anybody has a problem, we have to find a solution within our family – not outside the family.

I have heard quotes like this before. My old friend Joseph Blatter once said:

In this picture we can see Joseph Blatter with his longtime friend Jean-Marie Weber. They are members of the family, both the FIFA-President, also a member of the IOC, and the man who has paid an unbelievable amount on bribes to other family members. They are longtime friends. 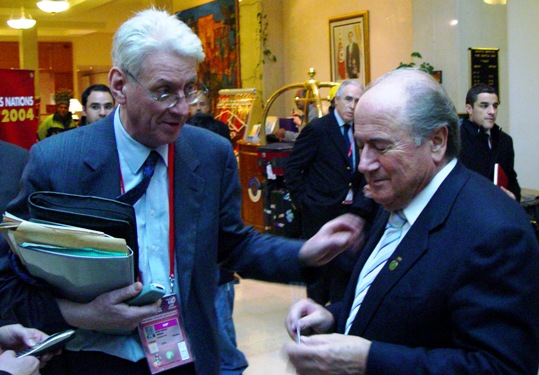 This brings me straight to my topic: The ISL bribery system: 138 million CHF for high-ranking officials in the Olympic world.

It is a serial story. It is a never-ending story. The story began in the sixties and seventies of the last century when Horst Dassler, the former boss of the sportswear-giant Adidas, formed his so called „sport-political department“.

Later, in the early 1980s, after the groundbreaking Olympic Congress in Baden-Baden, in the new age of Olympic commercialization and professionalism, Horst Dassler also created a marketing company: International Sport and Leisure – ISL.

And to give you another example: this company, ISL, was the first to get IOC contracts to deal with the newly invented Olympic marketing program – TOP.

Don’t be afraid: I will not go back to the 1970s. Nor will I repeat the presentations I gave at former Play the Game conferences. But I would like you to understand that this also a never-ending journalistic story which, I think, began in 1992 with the book „The Lords of the Rings“ written by Andrew Jennings and Vyv Simpson.

In legal terms: bribery was not a crime in Switzerland at that time. The ISL system of paying sport officials was worked out – as it came out during the court hearings – together with KPMG, some of the most famous law firms in Zurich and was officially permitted by the Swiss Tax Authorities.

At the Play the Game conference in 2011, I guess, we shall probably analyze the next court case in the ISL saga. I will come back to this later.

An impressive number of sport officials and assistants, who have worked for Horst Dassler, for Adidas and the ISL company, who were created and brought into their positions by the visionary Dassler, are still in their positions in the Olympic world: as Presidents of International Federations, as IOC members, as so-called consultants, or – much more clear – as bagmen. One of Dassler’s closest assistants was Jean-Marie Weber. The French born Weber was always described as THE BAGMAN.

What we got to know at least during the trial in spring 2008: Jean-Marie Weber was the man who paid at least 138 million CHF to high ranking sport officials in the Olympic world between 1989 and 2001.

After Dassler’s early death in 1987 Weber became one of the top managers of the ISL group. The group was united under the ISMM umbrella in 2001 when the marketing giant collapsed because of mismanagement, greed and megalomania. It was the second biggest collapse in Swiss economy after the Swiss Air crash.

Jean-Marie Weber was always the bagman – until the bitter end. But it took decades to prove that description. It is now proven. It is now documented in several court files. According to lawyers and Judge Marc Siegwart in the ISL trial:

So if you like, we can talk about 156 million CHF.

And we can speculate about much more money. Imagine: According to criminal scientists about 95 to 98 per cent of all corruption cases never see the day of light. They remain undisclosed for ever. The reason for this is based in the system of corruption: money givers and money takers do not usually sign contracts.

Here are some important questions – and preliminary answers:

Before I come to the question „Who got the money?“ I have to give you a short and simplifying overview of the whole ISL case. Simplifying, because I am a journalist.

One important question: WHO HAS GOT THE MONEY?

The answer is simple: senior officials of the contractual partners of ISL.

Five of the defendants claimed they had no idea who got bribes. They claimed fellow director Jean-Marie Weber organized the payments. He laundered them through foundations in tax heavens and a British Virgin Islands company (and many others), which distributed the money to companies and individuals. Most of the money was given in cash.

The ISL/ISMM-group had held longtime contracts worth billions of dollars with:

The key for getting and holding these contracts was a gigantic bribery system.

But we can’t even find the word „corruption“ in the Olympic Charta, the constitution which governs the IOC and runs the Olympic Movement.

The phrase „corruption“ does not exist in the Charta. Nevertheless: corruption exists in the movement.

There are a lot of definitions in different fields: juridical, theological, political, social-cultural, economical, ethical definitions. It is a wonderful playing-field for word-artists; but one does not have to be a lawyer to talk about corruption. Common sense is quite enough. That is why I prefer a very clear and very simple definition; it is the definition of the NGO Transparency International.

Corruption is operationally defined as the misuse of entrusted power for private gain.

I think it is simple enough.

There are just a few well known names on the list: Nicolas Leoz from Paraguay, head of South American Football Federation CONMEBOL, and member of FIFA’s Executive Committee. Just a few hundred thousands for him. Mr Leoz denies any wrongdoing.

On the list we could also find the company Renford Investments. According to an investigation by the Swiss journalist Jean-Francois Tanda, Renford was owned by Ricardo Teixeira, President of the Brazilian Football Federation CBF, FIFA Exco Member, and his former father in law João Havelange, FIFA President between 1974 and 1998, IOC member since 1963 – the doyen of the International Olympic Committee. By the way: Once there was also a dubious transfer of a million CHF which was once accidentally transferred to a FIFA account and was immediately re-transferred.

But coming back to the ISL bribery system, which was mostly a cash system. As I have said earlier: According to all defendants in the ISL court case Jean-Marie Weber is the only person who knows the names of all takers. Simply because he has organized all payments to sport officials. As I have mentioned earlier: The two parties in corruption cases don’t usually sign contracts.

Here you can see a simple chart of the bribery system in the last years of the ISL company. The chart is based on the court files and a chart which was presented by judge Siegler during the trial. 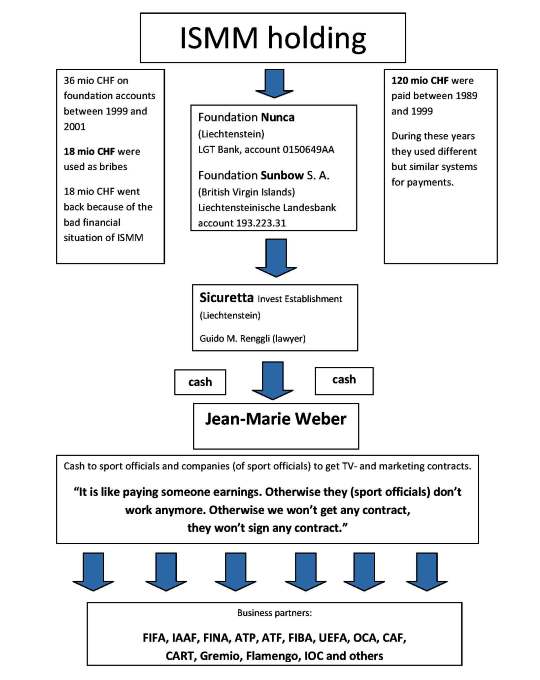 Christoph Malms, former Chief Executive, said that after joining ISL in the 1990s he was shocked to discover the business was built on bribes.

„I was told the company would not have existed if it had not made such payments“, Malms testified.

„I was always told they went to well-known decision-makers in the world of sports politics.“

Malms said kickbacks were usual in the sports marketing and sports political business worldwide. It was the style of the business. They have used terms like: PROVISIONS. FINDER-FEES. Or even: SALARIES:

„If we hadn’t made the payments, the other parties wouldn’t have signed the contracts.“

„It was like paying salaries. Otherwise [high ranking sport officials] would have stopped working immediately!“

„The other side doesn’t want to be named, that is the very sensitive aspect of this business.“

Würgler claimed that Joseph Blatter, back then General Secretary and now President, had approached his client Malms and told him, if ISL wanted to keep FIFA’s business, Jean-Marie Weber would have to stay in his positions in the company. If not, „it would be bad for ISL“. Würgler also said that during the World Cup in France 1998 the outgoing President Joao Havelange made the same demand.

Würgler described the situation as follows: Anybody at FIFA who knew about the bribes and who was getting SCHMIERGELD could exercise great power over fellow officials. Würgler said: ISL became a private source of money for FIFA officials, virtually something like their private bank.

There are numerous well documented, strange operations within FIFA.

In their decision the three judges in Zug stated that FIFA „knew more than they told investigators“, that the behavior of FIFA-officials „was not always in good faith“, and some of their claims „were not credible“.

(By the way: that seems to be typical for FIFA. The federation and its current General Secretary Jerome Valcke was described in another court case, the Mastercard-Visa-decision as a kind of a serial liar.)

In the ISL case FIFA was ordered to pay a part of the trial costs, despite claiming not having misled the authorities.

We have got an astonishing documentation of a huge bribery system. Some experts are saying: This is the biggest bribery system in Olympic sports ever. But nobody in the sporting world has taken any action. Not even against senior officials who were mentioned in the court documents.

By the way: Have I mentioned that Jean-Marie is still a member of the family? He is working with IOC members like Lamine Diack (President of the IAAF) and Issa Hayatou (Vice President of FIFA and President of CAF).

This picture is not a good one, I know. But it is a kind of a document. It shows Weber in December 2008 during an IOC meeting in the IOC headquarters in Lausanne. The IOC President who promised to fight all sorts of corruption with his zero-tolerance-policy is also to be seen in the picture: 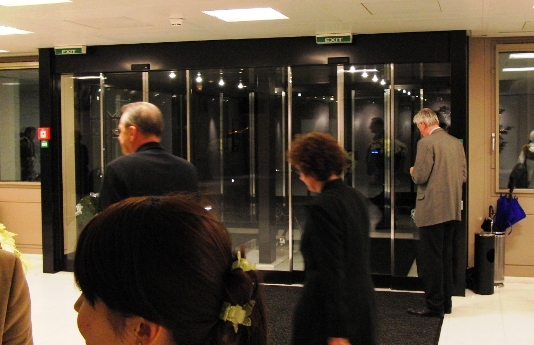 Olympic sport organizations are always arguing that their moral and ethical rules have to be much higher and harder than other rules. The ISL bribery case appears to be a strange example for the extremely high standard in the Olympic family.