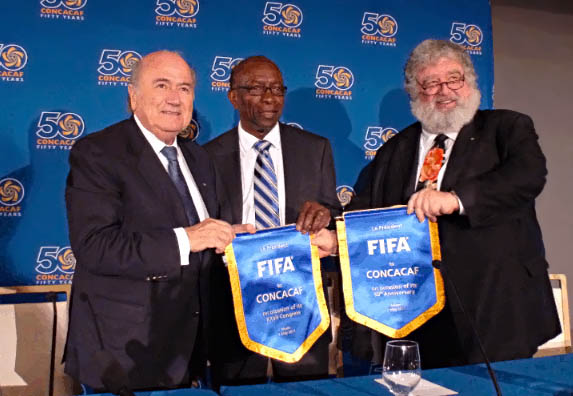 Football legend Romário, the great striker turned politician, sickened by Olympic ticket scandals, has launched a blistering campaign to force the International Olympic Committee to share control of the sale of tickets for the 2016 Rio Games.

The socialist Congressman last week fired off formal requests for Olympic officials to testify to a Brazilian congressional committee. Romário’s first target is veteran IOC member Patrick Hickey, a member of the IOC’s Rio Co-ordinating commission who will be intimately involved in supervising ticketing plans.

Hickey, president of the Olympic Committee of Ireland, is in the unenviable position of having to explain how his son Stephen came to be on the payroll of the company that acquired a significant slice of Ireland’s allocation of tickets for the London Olympics. There are also questions still to be answered about Hickey’s knowledge of the bribes paid to win the 2002 Olympics for Salt Lake City.

What could this be? Lukashenko’s locking up brave young human rights protestors? The disqualification of two Belarusian athletes at the Beijing games after testing positive for more testosterone than a billy goat on Viagra? Lukashenko has kept them on the sauce with the London 2012 women’s shotput winner soon stripped of her gold medal.

FIFA president Blatter has given himself the authority to sign cheques without the approval of his staff or colleagues. Documents at the Zurich Commercial Register reveal that Blatter has had sole signatory powers for nearly two decades.

João Havelange, his predecessor as FIFA president, currently under investigation by the IOC for bribe-taking, had this power but as he lived in Rio, he allowed his then general secretary Sepp Blatter also to have sole rights.

As corruption allegations swirl around President Blatter he could, if he wanted, write himself a cheque for the $1.6 billion in FIFA’s bank account, take his empty suitcases to FIFA’s bankers UBS on Zurich’s Bahnhofstrasse, speed on to the airport, take his last trip on a FIFA-funded jet (he never flies scheduled airlines) and abscond to safe haven in countries like Burma, Russia, Azerbaijan and Zimbabwe where he has been given warm welcomes in the last year.

by Andrew Jennings, Transparency in Sport

Good morning. Thank you for your invitation.

I have been an investigative reporter for 45 years. I research and acquire confidential documents.

Then I write books and articles and make investigation films for the BBC.

I have been investigating FIFA for 10 years.

I have considerable experience in investigating organised crime and I can assure you that FIFA ticks all the boxes in the academic definition of an Organised Crime Family.

Today I want to tell you about the latest corruption crisis at FIFA and how it will impact on the 2014 World Cup.

But first – Meet some of the members of FIFA’s 23-man Executive Committee. 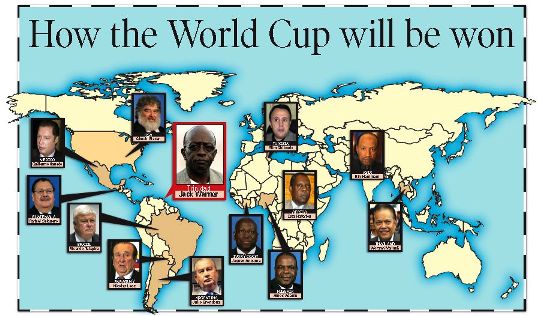 „How the World Cup will be won“ / Grafik: Screenshot vom Sunday Herald

Jack Warner must have his World Cup. FIFA’s serial kleptomaniac, now 65, knows that 2018 is his last chance to acquire the world’s most lucrative sports event and, with his greedy family, loot it. Where does he want it? Mexico.

If anything goes awry, the USA is the fallback. Both countries are captive members of Concacaf, the regional FIFA franchise controlled from Trinidad by Warner.

It’s unthinkable that the Warners would let a World Cup and the once in a lifetime chance to skim TV rights, marketing and hotel packages slip through their fingers. And of course they are well-practiced as the biggest ticket racketeers ever.

When they staged FIFA’s Under-17 championship in Trinidad in 2001, I was there to see them snaffle fast food and beverage contracts in the stadiums, security, hotels, the IT business and, with the personal approval of FIFA president Blatter, their travel agency got all 15 teams‘ flight tickets. The construction contracts came earlier.

In 2007 Warner told the BBC that his franchise must host 2018 saying, ‘There are moves to give it to England. I must fight that. I really don’t believe that we should lay down and play dead to anyone who wants to take the World Cup from Concacaf.‘ Only two countries in Warner’s franchise could stage the championship: Mexico and America.