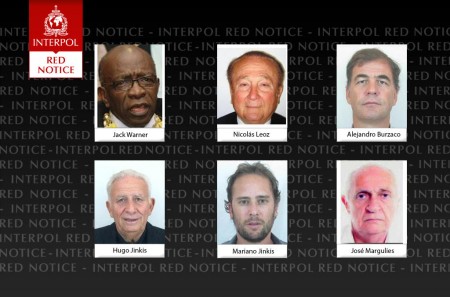 „The institutions have mobilized to eliminate the only independent candidate“, sagt Jérôme Champagne. Jérôme Champagne: „Which FIFA for the twenty-first century?“

Ok, some observers are thinking this man is a potential FIFA president. Some may think, the following words can be read as a presidential manifesto.

The name of the author? Once upon a time, in FIFA uniform: Robben Island, December 2009

I have always seen him as one of the top five competent officials in the whole Olympic World. But, he has two major problems: Champagne is not a member of FIFA’s gerontocracy. And he is too good. He became too influential and dangerous for all powerholders in FIFA: the President, the General Secretary, some Executives. That’s why he was fired two years ago.

After almost two years of silence (but years of influential work on different fields) he strikes back.

Read his programme, which he has sent out last weekend to all 208 National Federations. It may differ from another, a journalistic manifesto :) – The Real Road Map: investigate corruption in FIFA, what should be happening? – but it comes from inside. And it is, in general, astonishing.

Here it is, in length.

WHICH FIFA FOR THE TWENTY-FIRST CENTURY?

Two years ago, exactly today, I had to leave FIFA having served there during eleven years with passion, dedication, for the football associations composing it and for football which is FIFA’s raison d’être.

The circumstances of my departure (see here attached FIFA press release dated 15th January 2010) have no other value than anecdotal and now form part of my past.

In these past two years and in spite of many requests, I remained silent and have not expressed myself on FIFA, its current affairs and its situation. I limited my public comments to my football consulting activities and to what I have been privileged to implement for Palestinian football alongside local FA President, Mr. Jibril Rajoub. In 2010, I spoke on several opportunities on the meaning for Africa and the rest of the world of the first FIFA World Cup organized in Black Africa, a project I have always considered as central towards the vision of a fairer and less racist world. Similarly, I defended in some French media the reform on bi-national players and the purpose of the changes in 2003 and 2009 of the FIFA regulations on that particular topic of bi-national players unfairly blocked in their international career.

But on more general topics such as FIFA’s, I always refused since I wanted to give me the time to absorb what happened in my 11 years of intense daily involvement in world football, to give me the time and the distance from the daily activities and controversies of the game in order to reflect on the future.

For the past months, FIFA engaged itself in a reorganizing effort made necessary by the troubled times that it is facing.

In this context blossomed in my mind the idea of contributing to this debate. I do it with humility and modesty without any other ambition than to stimulate it, but with the experience of my FIFA years and of all the projects I was so proud to contribute to. I do it affirming that no one has THE truth.

However, I do it with resolve because I love the game of football too much to remain indifferent to its fate. Because I do believe that today FIFA is needed to protect and develop this sport. And because I feel more than ever that football should play its transformative role to serve a fractured, unequal and globalized world with the vision of true world governance.

Moreover, the world is my passion, having lived on four of its continents, visited more than 140 countries and merged fourteen years of diplomatic career with my years spent in football (seven in the magazine France Football, one in the Local Organizing Committee of the World Cup France 98 and eleven in FIFA).

This contribution is structured around the triptych symptoms, diagnostic, solutions. In my opinion, one should start from the analysis of the problems faced by football today in order to be able to define its central issues and only then propose possible cures.

Rather than a top-down approach, it is necessary to start from football and to be aware of these central issues to define what needs to be achieved and to determine what FIFA could become in the twenty-first century. FIFA being at the service of football, the analysis of football and of its challenges will define what FIFA should be and will be. And not the other around!

1) THE SYMPTOMS: A SEVERE CRISIS TO BE ANALYZED WITH THE PERSPECTIVE OF FOOTBALL HISTORY

Read MoreJérôme Champagne: „Which FIFA for the twenty-first century?“

live-Blog aus Zürich: „We are not in a crisis!“

ZÜRICH. Und es sprach der Große Vorsitzende: Crisis? What is a crisis? We are not in a crisis! We are…

Read Morelive-Blog aus Zürich: „We are not in a crisis!“